Five runners representing three Lebanese clubs participated in National Turkish Athletics Indoor Championship at the Atakoy Arena in Istanbul from 5 to 7 February 2021. Most of them ended with national records for indoor competitions.

The result of the first day came as follows:

Gretta Taslakian from Inter Lebanon set a new national indoor record on the 400m at 57.65 seconds and qualified to the finals.

Aziza Sbaity from Antonins and Haya Kobrosly from Inter Lebanon ran the 60m indoor and they performed 7.58seconds and 8.01seconds respectively before they qualified to the final.

In the final 60m indoor they set 7.56seconds for Aziza with a second place and 7.96seconds for Haya.

Nour Hadid from Army ran on the 60m indoor and set 7.00seconds.

On the second day, 2 national indoor records are broken by Aziza and the results came as follows:

And the third day ended with 3 national indoor records:

Gretta Taslakian set another National Indoor Record on the 400m at 56.77s. 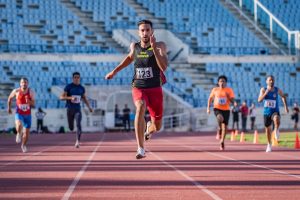